SCI-FI PHILOSOPHY CONCEPT: The sci-fi genre predicted some scenarios that we are currently facing, yet the future is different than what we have ever dreamed of. We were supposed to establish a new society on Mars, but instead are addicted to social media. Maybe the 21st. century will be different than the dream, because humanity is trying to push its limits without a clear vision. The vision of a good life and the concept of the meaning of a good life are challenges that have always fascinated philosophers. Some contemporary philosophers speculate that we should try to overcome the limitations of our species by developing new forms of (un)natural selection based on intelligent choice. Perhaps science will be art after all, but whose choice will it be, and for what intelligence will we decide?

The series Sci-Fi Philosophy is based on the premise that we should try to bridge the gaps between prediction and reality, science and the ordinary, scholars and the general public, past and the future. UCM CB organizes Sci-fi Philosophy as a public series of lectures dedicated to the discussion of future visions of experts from different fields of beneficial human inquiry. The lectures are open for all participants that are interested in the themes of the time that will one day come.

The series started in 2018 and is organized by UCM CB with generous support from the Slovak Research Development Agency, the Department of Philosophy and Applied Philosophy of the Faculty of Arts, University of Sts. Cyril and Methodius in Trnava, and the interest, spirit, and positive visions of all participants. 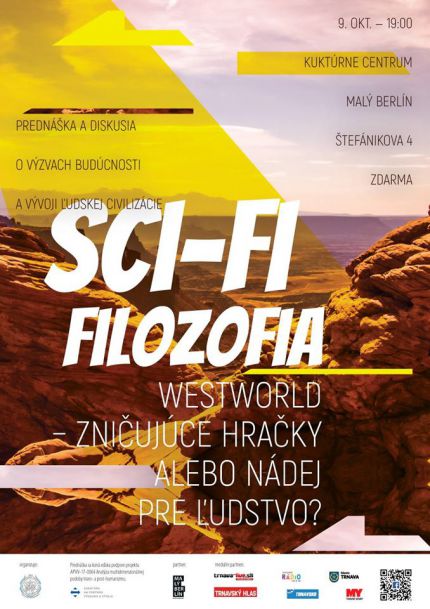 Successful TV series Westworld (2016 - 2018) brings forth the idea of hyperreality in the form of amusement part where humanoid androids create an environment for the pleasure of higher classes. The human visitors meet with the humanoids in predefined scenarios where they are almost identical with human beings. The humanoids resemble humans so much that sometimes they aware of their existence and start to identify as individual beings. The classical topic introduced by Asimov (already used in movies like Blade Runner or Ex Machina) is getting new dimensions because here the artificial intelligence is overshadowing human capabilities. The first season of the Westworld focused on the ability of the humanoids to grasp their existence. The second season established the connection between human intellect and the performance of computers. The Westworld also introduces different ethical questions about the enhancement of human beings, slowing or maybe even stopping the process of ageing and uploading the human mind into a computer. The Westworld serves as a reflection of the current development of human civilization, especially its uniqueness, competitiveness and brutality. 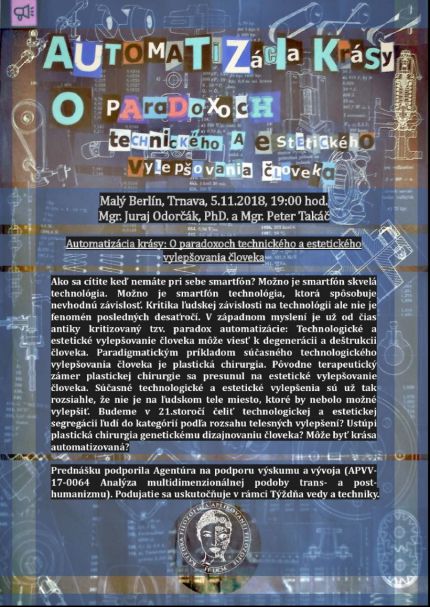 Automatization of Beauty: Technological and Aesthetic Paradoxes of Human Enhancement

How do you feel without a smartphone? Smartphones can improve our lives or maybe they can make us addicted. The critique of technology is not a recent phenomenon because it has been present for several decades. The issue of automatization has been present in Western philosophy since the antique period. Technological and aesthetical enhancement can degenerate and destroy the human form. Plastic surgery is a paradigmatical example of technological enhancement. In the past, the primary aim of plastic surgery was therapy, but now it is shifting towards improving the body. The procedures are so advanced that they allow improving all the parts of the body. As a result of these changes, the 21st-century advancements in plastic surgery creates many ethical issues.

The Eighth Day of Creation: Editing of the Human Genome

In April of 2015, a small group of scientists published results of the historically first experiment intending to change the genes in the early human embryos. The revolutionary new method used in this experiment is called CRISPR/CAS9. The changes made in these embryos are inherited by the next generations. These experiments created a global discussion and created a new ethical question. Do we have the right to change the human genome? Is ethical to alter it to prevent genetic mutations? What if this method is used not to fix but to enhance the human genome (posthumanism). Is such an approach still ethical? There are many different answers to these questions, but one thing is certain, the possibility to alter the human genome became a reality.

The Technological Control of Love

Almost half of the marriages end in divorce. The neuroscience analyzes the current problems of partnership, and many pieces of research suggest that there is a connection between love and biochemical reactions in a brain. Love is a biochemical reaction, and such reactions can be controlled or altered. Therefore, in the future, it might be possible to control love and alter it as we deem suitable. 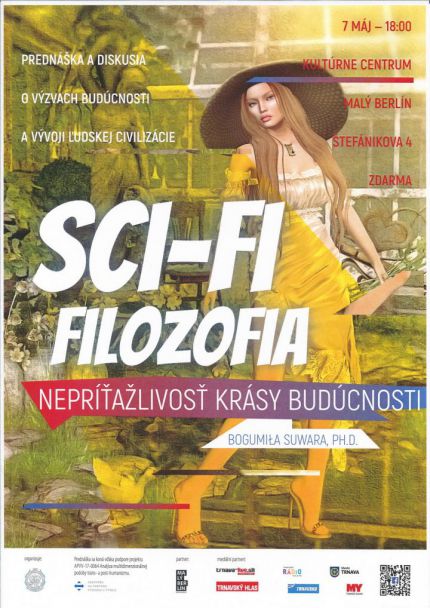 The Unattractiveness of Future Beauty

Can science alter the attractiveness of beauty? Can future glorify the unattractive beauty? The current art often cherishes ugly and disgusting themes instead of focusing on appealing the audience. Bodily beauty is now a theme of the past. The contemporary artists are fascinated by the overcoming the limitation of the body, narration and visuals. New scientific discoveries allow artists to pursue new fascinations and enrich them with visions and ideas about future development. As a result, the unattractiveness is becoming a standard of beauty.

The "Treatment" of Genes (About Gene Therapy)

The continuation of the presentation about editing a human genome presents new facts and discoveries. It enriches the past topic about the ethical reflections on CRISPR and reflects the international reaction from academia and governments.

Promises and Perils of Emerging Technologies for Human Condition

Emerging technologies are defined as fast-growing radically novel technologies with an estimated prominent impact on human society in the future. The ambiguity and uncertainty of emerging technologies at the same time raise techno-optimistic expectations, as well as serious worries about possible unwanted and unpredicted negative consequences following their introduction into wider practice. And because of their radical novelty, emerging technologies also challenge various traditional philosophical and ethical concepts, established risk assessment methods, science and technology governance and policies, science to public communication and practices within and outside the medical domain.

Philosophy Night - About Philosophers Who Want to Change Humanity by Technology

We often associate hope and promises with new technologies, but they do not have only positive impacts on the future of humanity. The new ideas about biotechnologies change the thinking within philosophy. Until recently, there has been only agreement that the biotechnological interventions have to be therapeutical. Some philosophers argue that biotechnologies should be used for human enhancement. Every person is free and should have the freedom to choose biotechnologically change his body and mind. Therefore, humanity will only cure itself through biotechnological changes.

Sci-Fi Democracy: The Government of Overhumans?

Democracy - the government of the people, by the people, and for the people. This is one of the most significant characteristics of 19th-century democracy. The system of governance also guarantees human rights and civil rights as well as equal distribution of wealth. According to Fukuyama, democracy should overtake the world because it is the only rational political system.

Sci-Fi Philosophy: The Problem of Extincion

According to some experts, humanity will face many existential risks in the 21st century. These risks not only damage the environment but also threaten the biodiversity of our world. The scientists from The Intergovernmental Science-Policy Platform on Biodiversity and Ecosystem Services (IPBES) argue that the threat of extinction is more urgent than the problem of climate change. Philosophically speaking, humanity not only threatens itself but also other lifeforms on its home planet. Mgr. Pavlína Bakošová will give us detailed insight into the problem of extinction and will guide us through some of the basic concerns. Humanity is at the crossroad of its existence, and this choice of path will determine its future. There is a possibility that we might miss the green light of the opportunity to act and will be blocked by the red light and will be unable to act and change. Will we survive or die like dinosaurs?